Challenges: Expansion of the existing warehouses by an additional 10,000 pallet bays for raw and finished goods.

Solution: An approximately 16-metre-high pallet rack warehouse to allow for effective use of space, with support from the STILL shuttle system. Additional automated disposal of production waste through the iGo Easy system.

“The growth here in recent years has far exceeded our expectations”, sums up a visibly happy Thomas Schmidt, Production Manager at Heuchemer Verpackung GmbH, speaking at the official opening of the modernised and expanded logistics centre at its Miehlen site. An almost 16-meter-high pallet channel warehouse, four STILL PalletShuttles, two MX-X Narrow Aisle Trucks (VNA) and efficient material handling – these are the components of the system solution implemented by STILL for Heuchemer.

Automation for the future

Each year around 450 million corrugated board and plastic packages are stored and dispatched there. With figures like this Heuchemer can be counted among Germany’s leading packaging manufacturers. In Autumn 2012, the company management decided to prepare for further growth by expanding the existing logistics centre and automating as many processes as possible. And this is when the packaging manufacturer turned to the expertise of STILL GmbH, the worldwide leading provider of customised intra-company logistics solutions. “It was a logical decision for us. We have known the company for a long time and are highly satisfied with the quality of their products”, says Production Manager Schmidt, referring to the good experiences of and long-term business relationship with STILL.

As the system integrator STILL was responsible for planning the entire facility, defining the structural and technical requirements for the forklift trucks, warehouse technology and rack systems and ultimately taking the lead in the implementation of the entire project. “It was an exciting task, where every detail needed to be carefully examined”, says STILL Project Leader Philipp Hoops.

The modern logistics centre has been running in regular operation since August 2014. Each day around 200 goods pallets arriving from production are removed from buffer storage by MX-X Narrow Aisle Trucks (VNA). For this reason, a new delivery system with 12 chain conveyors was integrated into the undermost racking levels of the already existing STILL shuttle system. From here, the pallets are passed on to the high-shelving warehouse. Particulars: for the semi-automatic STILL PalletShuttles. These are able to independently recognise the differing overhangs of the pallets, and can then store them equidistant within the channels of the 46-metre-wide and 42-metre-long high-shelving warehouse. In total, 10,650 bays are available, spread out over more than 1000 rack channels.

At the official opening of the logistics centre, it was also announced that the next phase of the automation was ready to begin: the disposal of production waste, which even today is performed manually using STILL’s RX 20 electric forklift trucks, will be carried out automatically in the near future and will make use of STILL’s new iGo Easy system, which was fittingly handed over to Heuchemer during the inauguration.

The iGo Easy is the world's first automation solution for simple, standardised orders which enables full configuration, control and monitoring to be carried out via iPad. What's more, the system can be installed independently by the customer and, if necessary, adjusted to new environments at a later date. 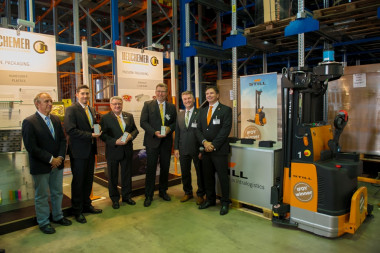 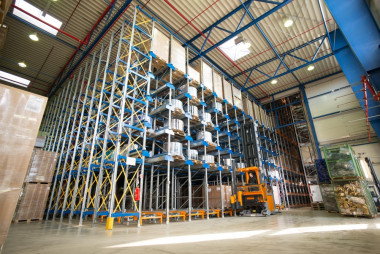 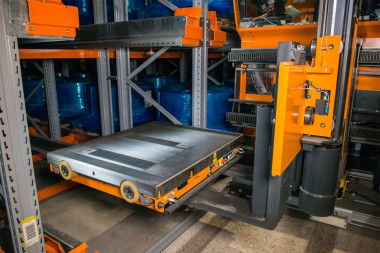